I also have prints for sale of all my paintings 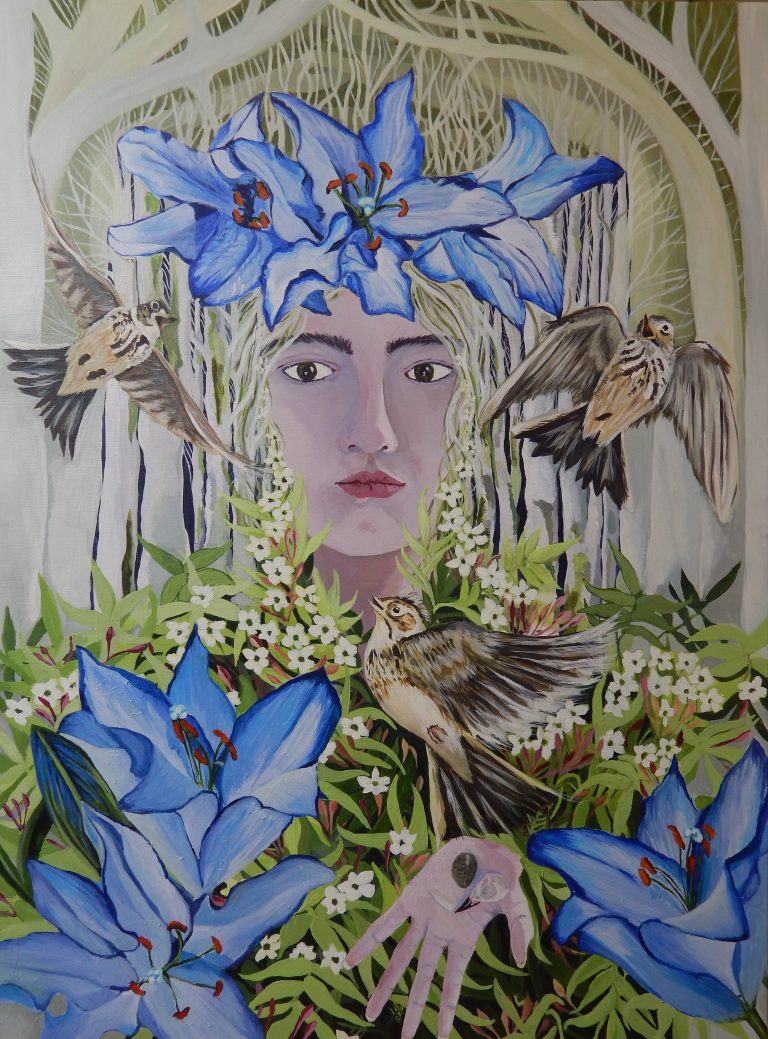 A Force Of Nature

A Force of nature , is a female version of the green man . She represents  the coming of spring and is based on the pan -European goddess cult -a religion based around the spinning of fate and the cycles of birth -life -death , maiden -mother -crone , spring -harvest -winter . 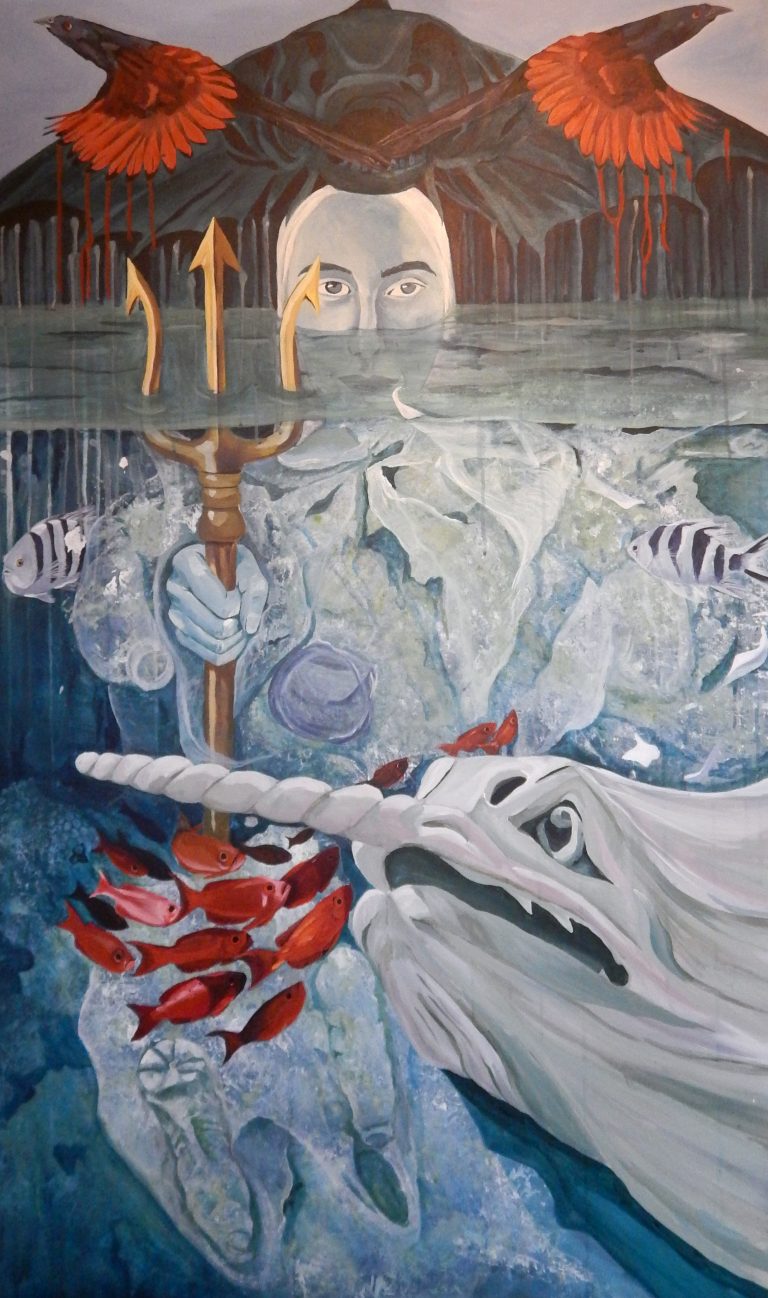 AMPHITRITE is the goddess-queen of the sea; she is the female personification of the sea, mother of fish, seals and dolphins. Here she wades through the plastic waste with her trident sending out her rain birds to bring forth the Monsoon to wreak revenge. 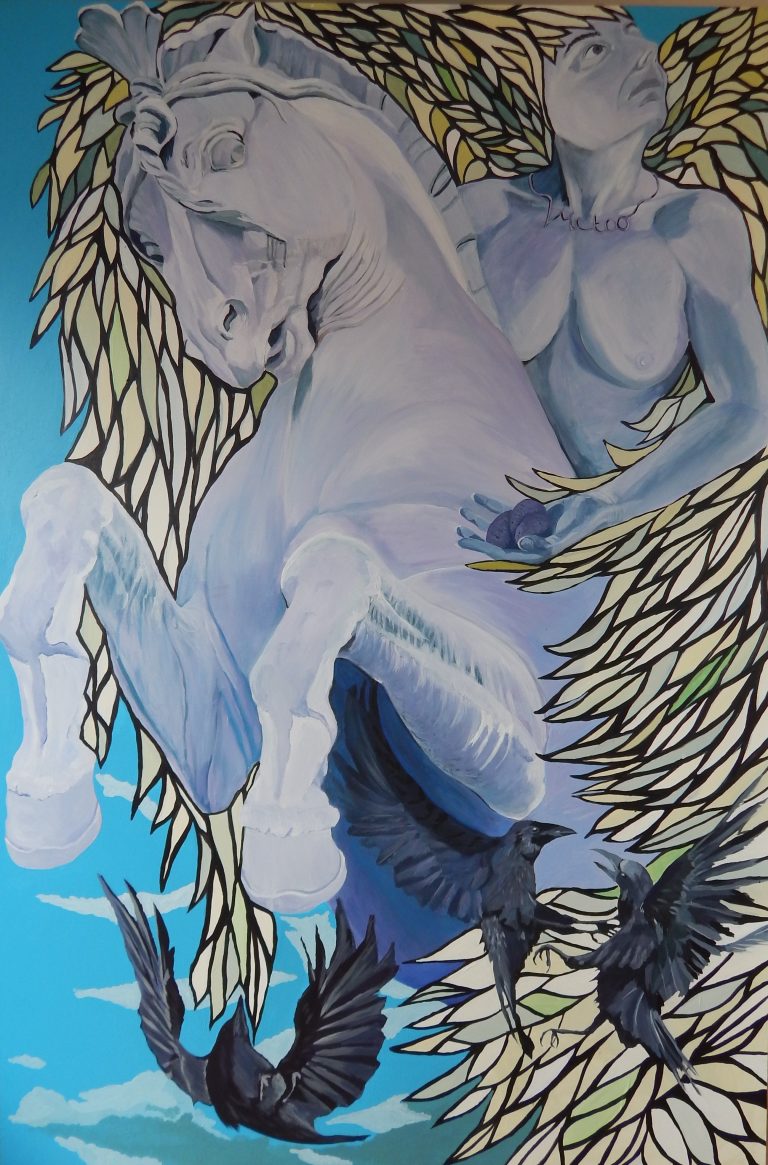 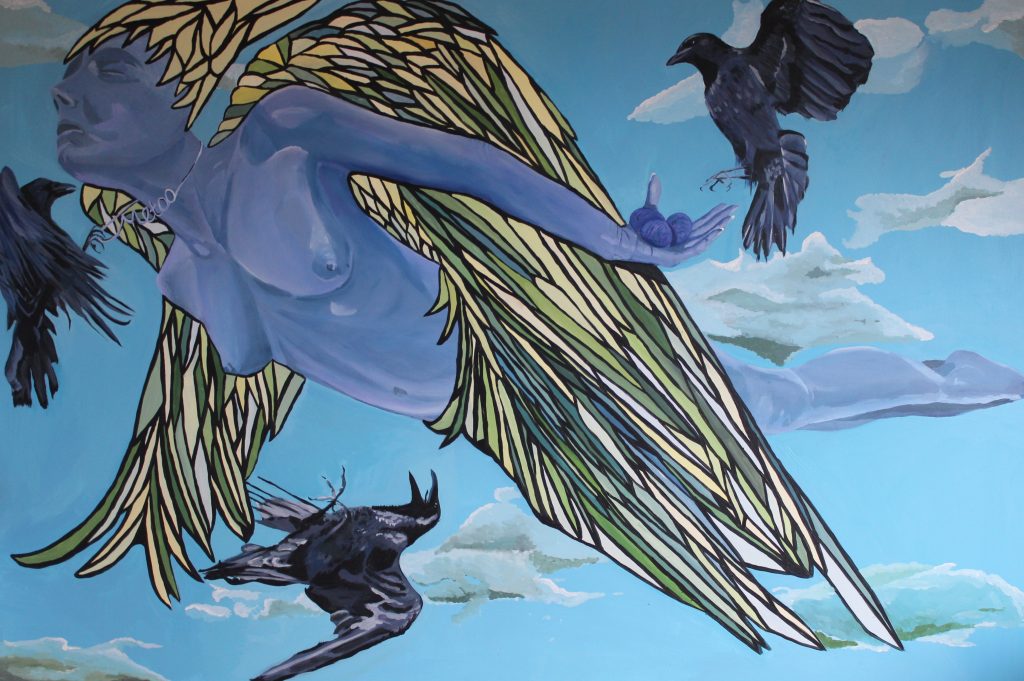 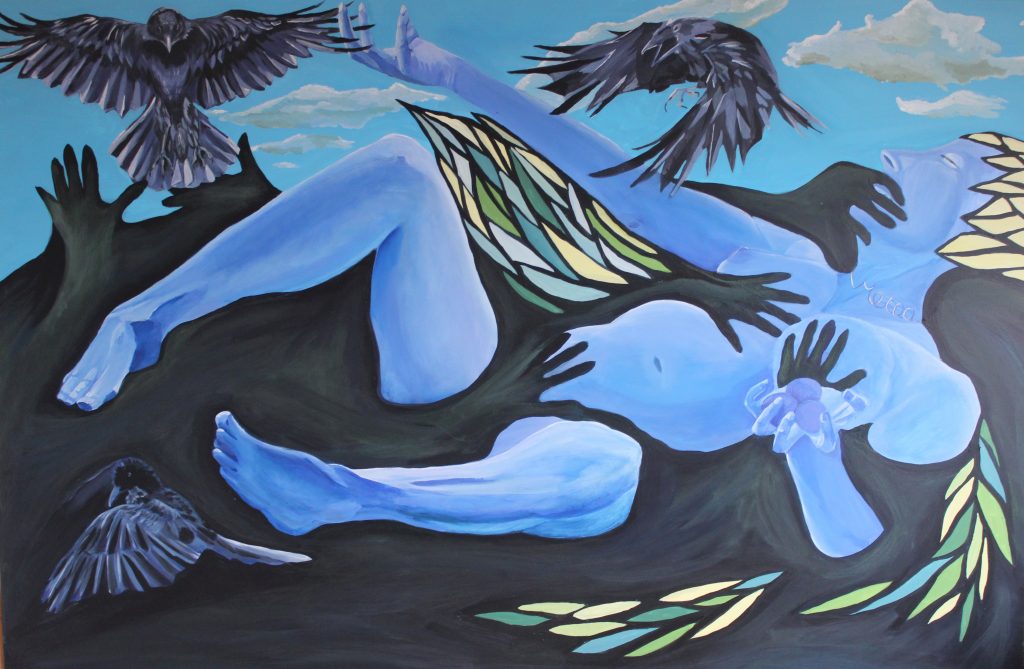 This triptych loosely follows the story of Brunhilde  the greatest of all Valkyries “she caught and held the Nordic  imaginations for centuries . Her literary and iconographic development traces more than a thousand years of social and religious upheavals that changed ideologies about womanhood”

There are many stories about Brunhilde the strongest of the Valkyries , this triptych follows her fall from grace when she disobeys Odin her father’s orders , Odin’s punishment is to stab her with a thorn that induces an enchanted sleep and to surround her with a ring of magical fire. She becomes an fallen celestial women , no longer able to fly ,  her divinity and power gone , doomed to love any man who could brave the fire to awaken her . Brunhilde once woken  “understands her situation as a human women – that she is a commodity of exchange between man” (Serinity Young Women who Fly) 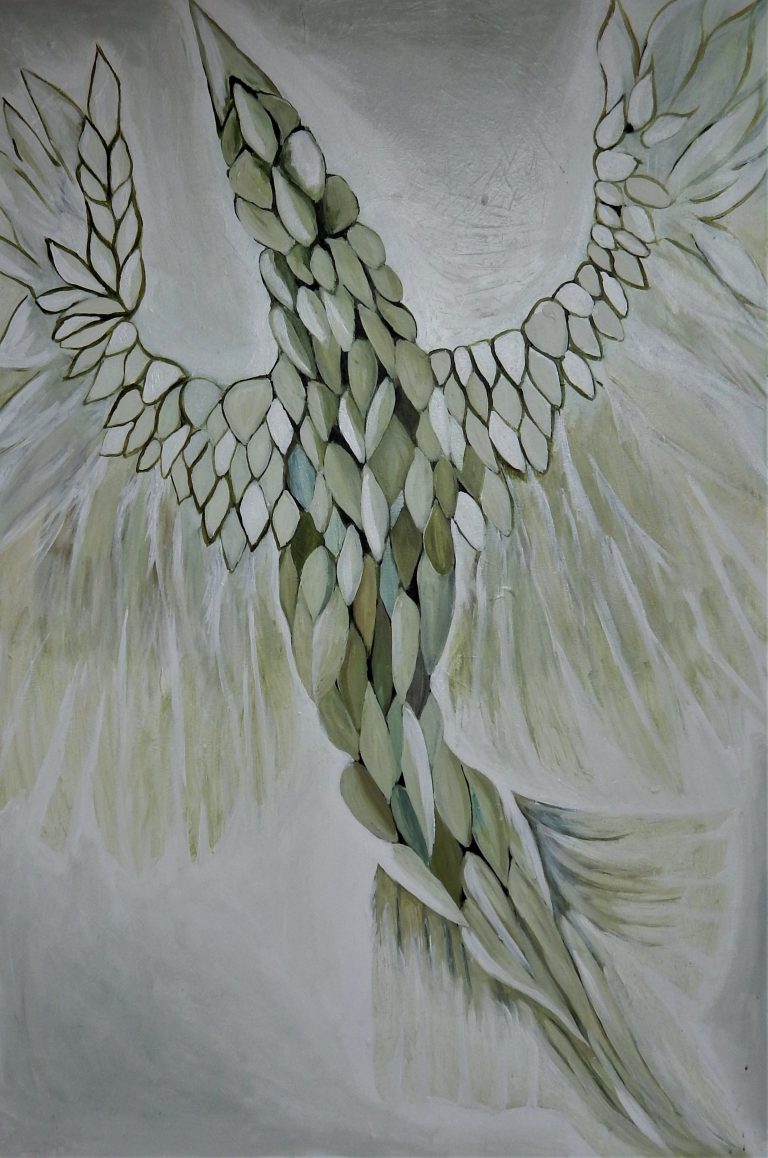 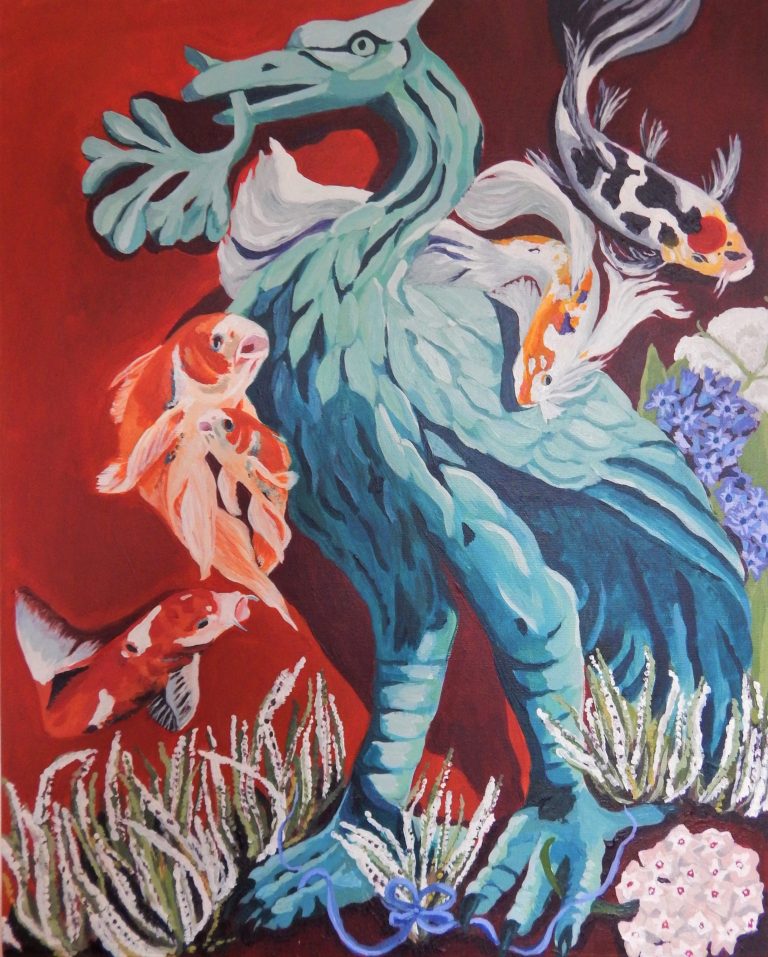 The  Liver bird is a mythical creature which is the symbol of Liverpool . The two most famous Liver birds are Bella and Bertie , Bella looks over the river to protect the port and commerce . I have used a very old image of the Liver bird and also incorated koi carp which represent good luck , abundance and perseverance and also a symbol of Liverpools cultural diversity . 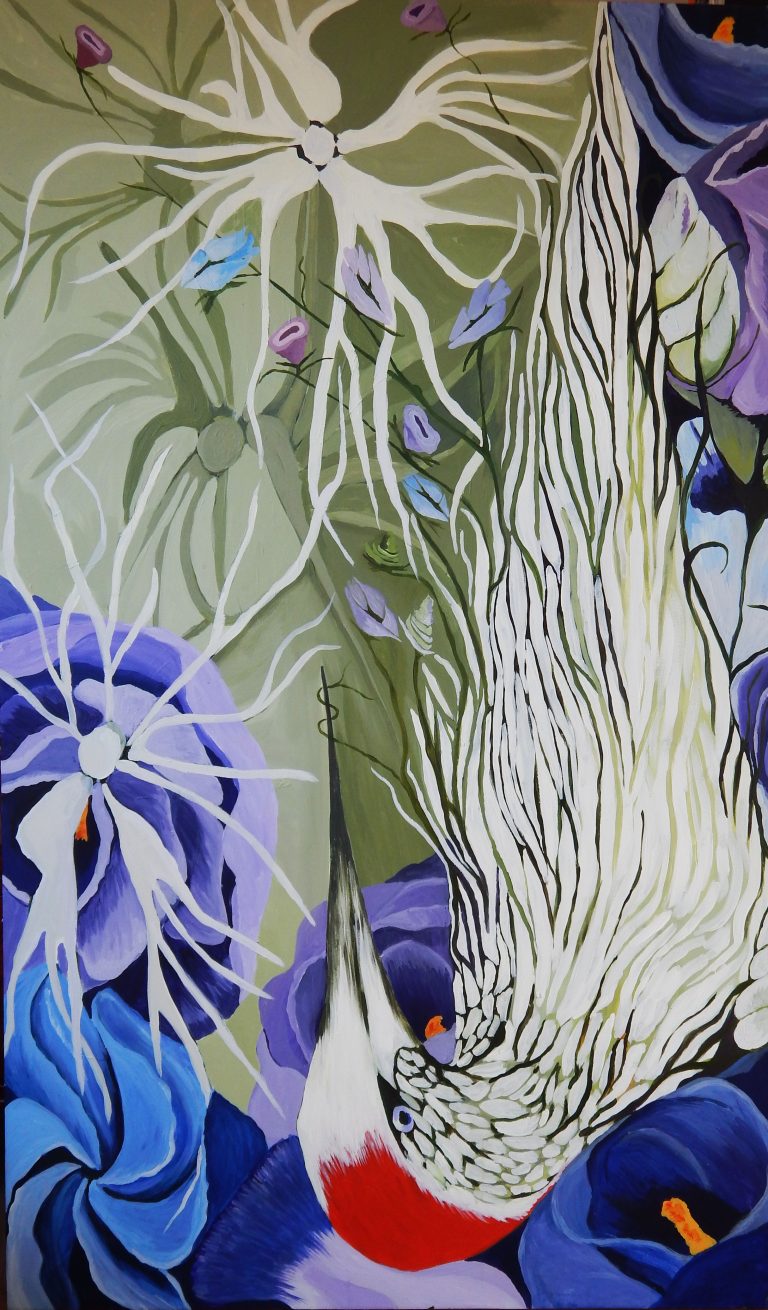 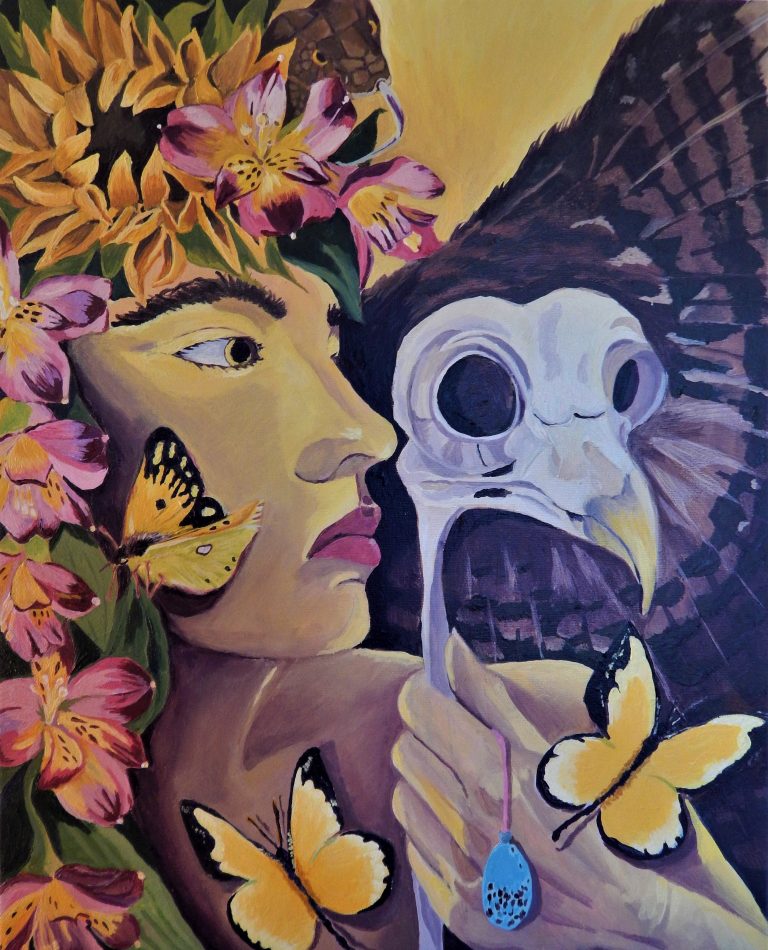 Lilith is the she–demon, documented in Hebrew and Middle Eastern mythologies.  ”In the light, Lilith is the independent female, the free spirited intellectual and sexual women who demands freedom of expression and equality in all matters and as such she embodies a serious threat to societies based on the domestication of women and nature”(Riem Farahat , Original Resistance 2019) 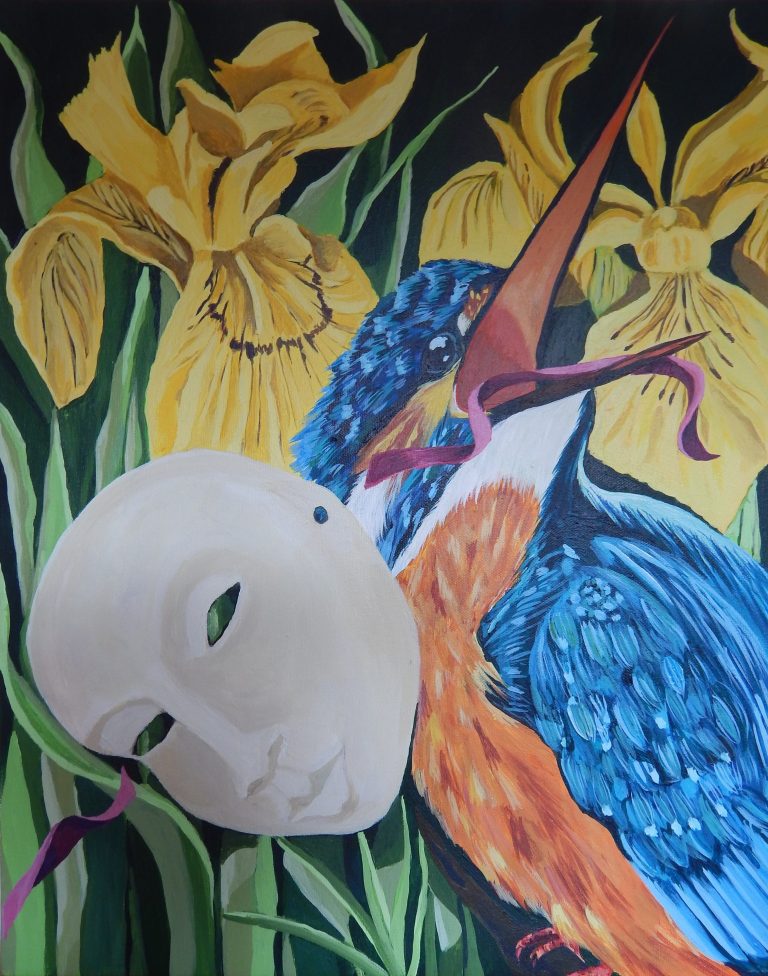 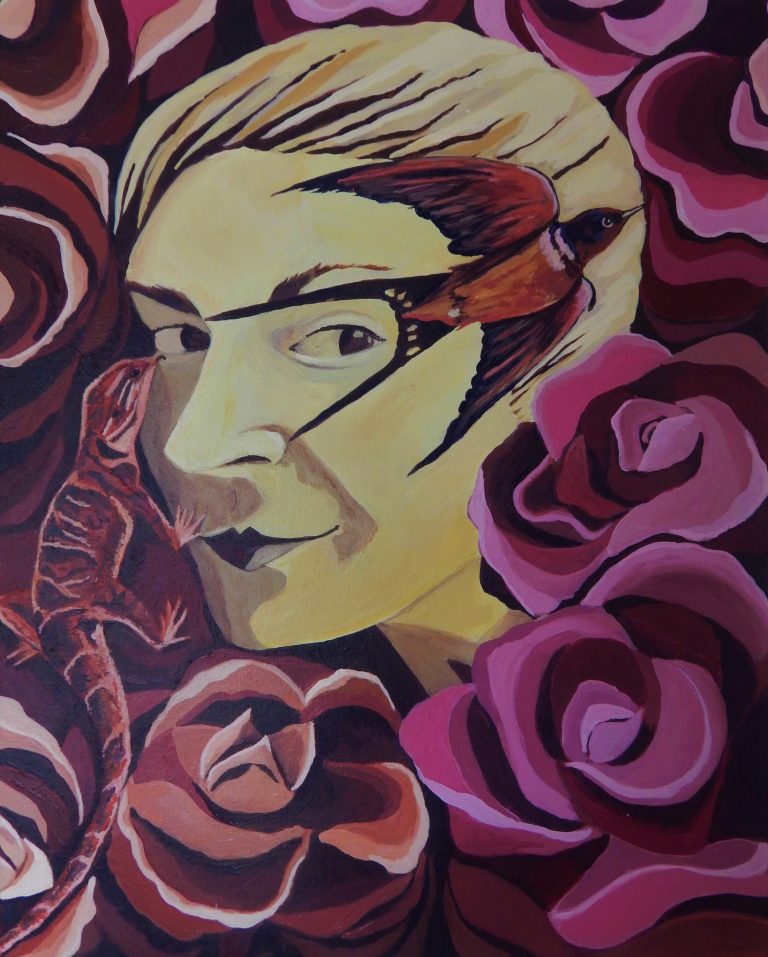 Mischeif of the deity 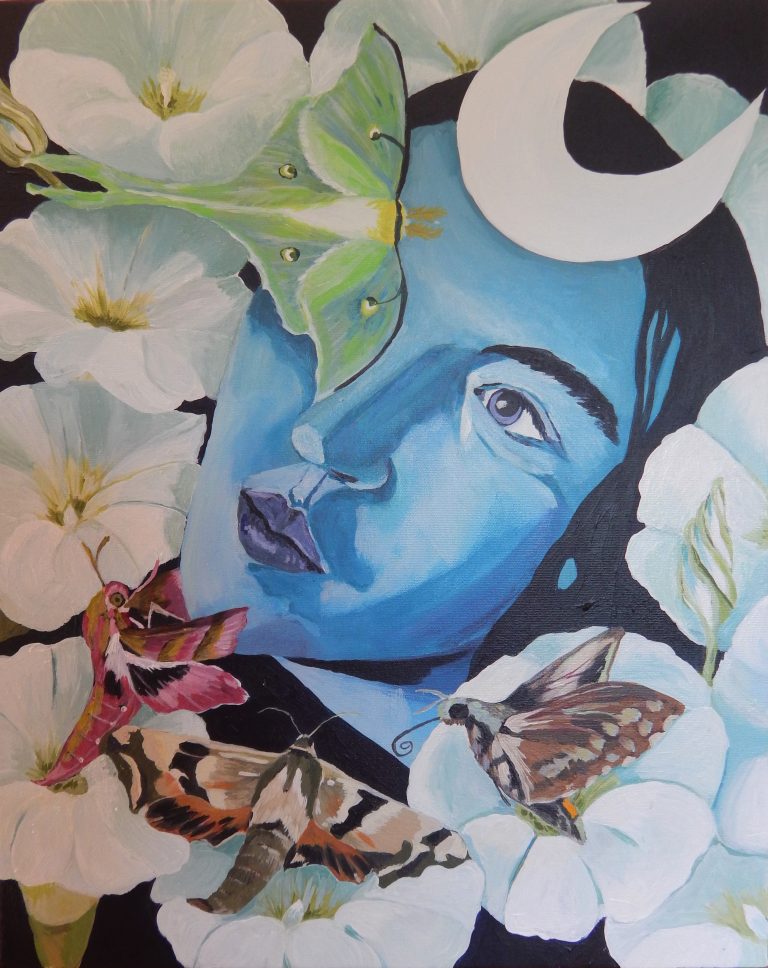 Selene  is the personification of the moon , she was worshipped at the new and full moons in Greek and Roman mythology , she was usually represented as a women with a moon often in crescent form on her head . The evolution from one moon to another, dying and being reborn without end is the signal characteristic of the moon, her worshipers  celebrate this cycle 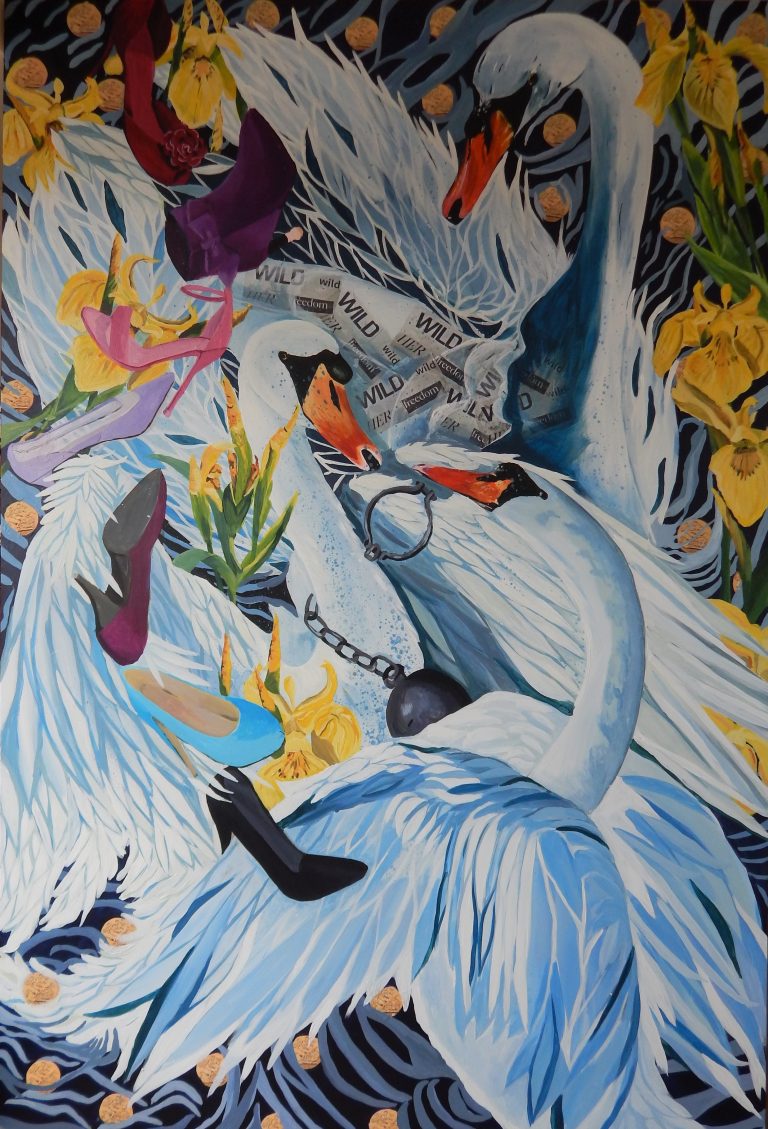 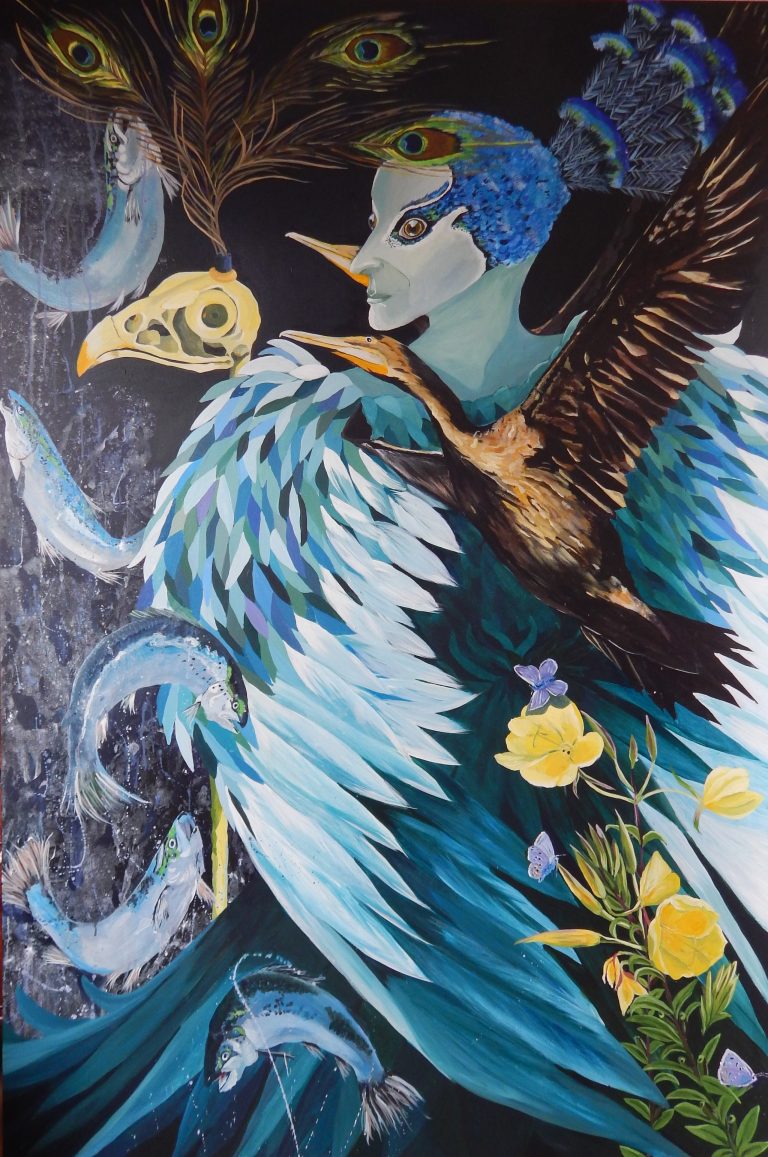 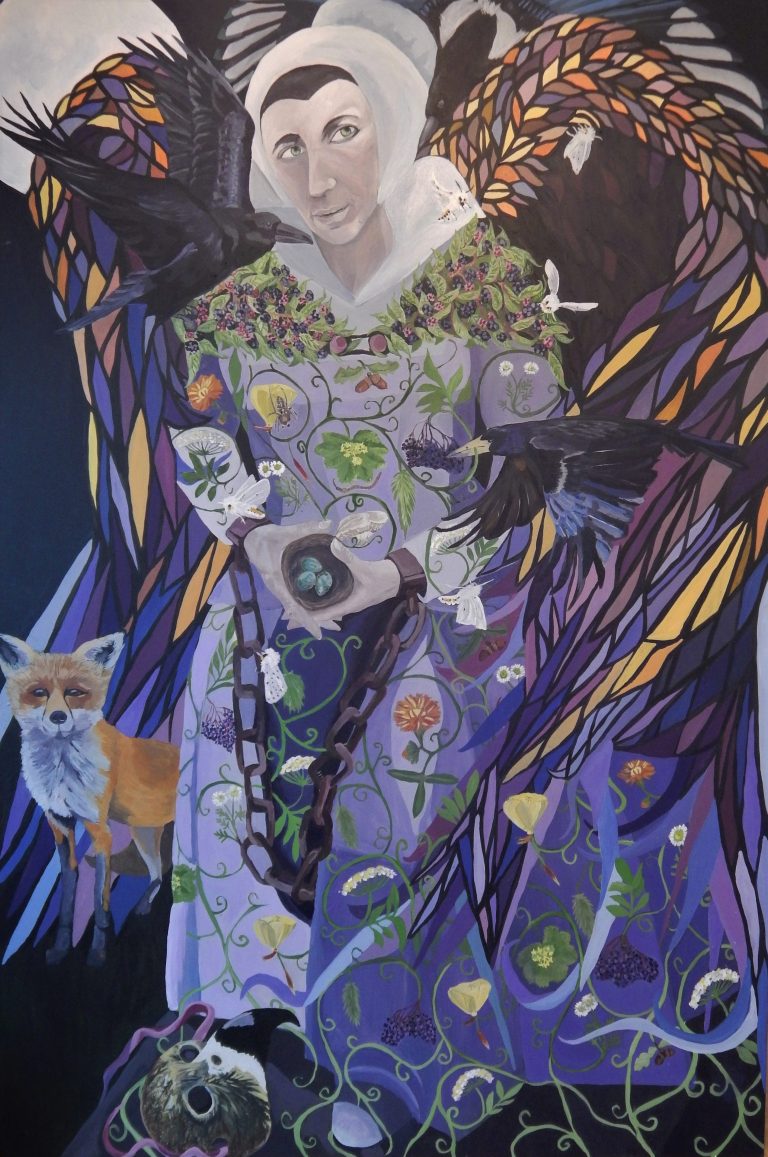 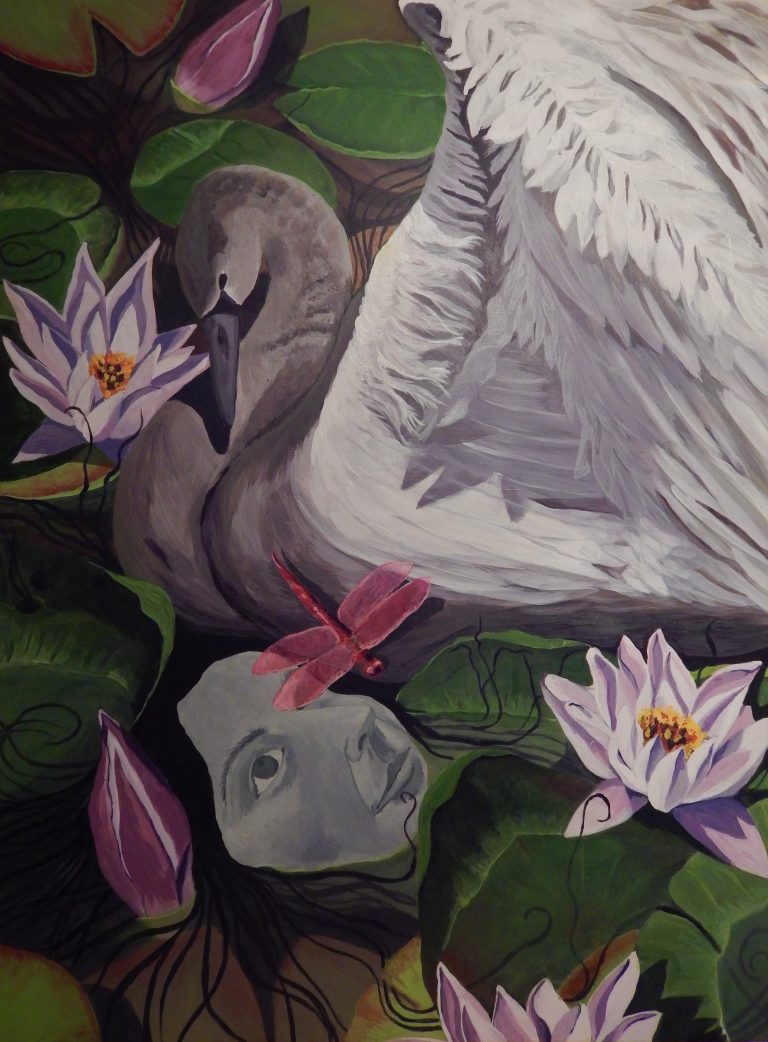 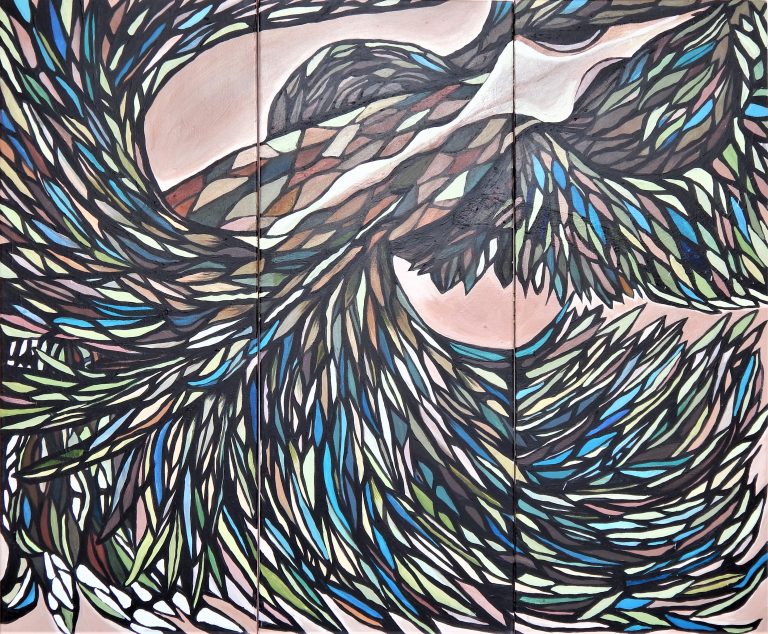 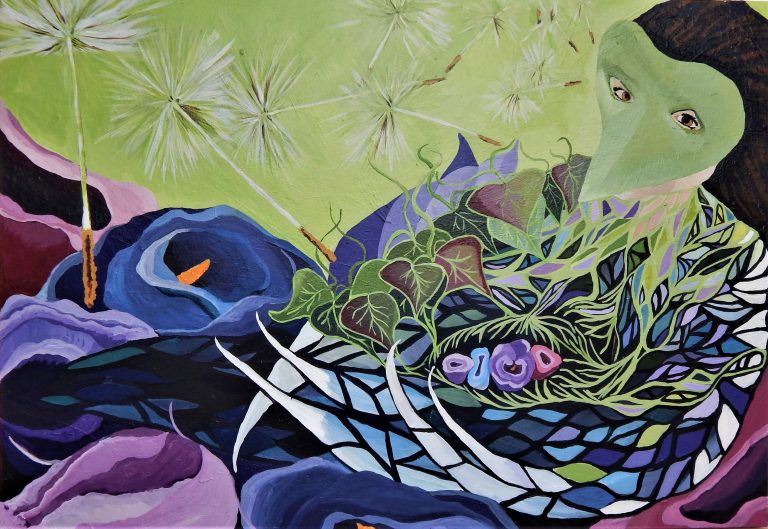 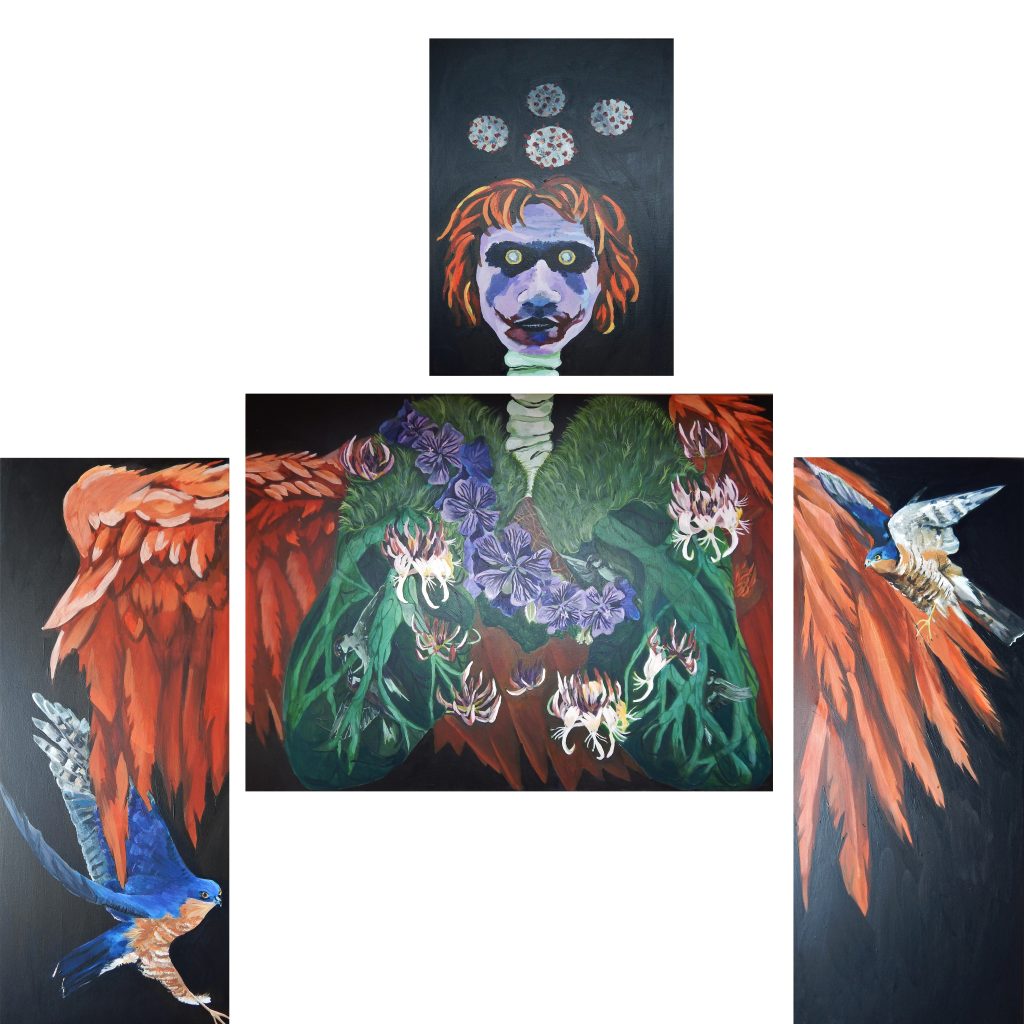 The Death of Austerity 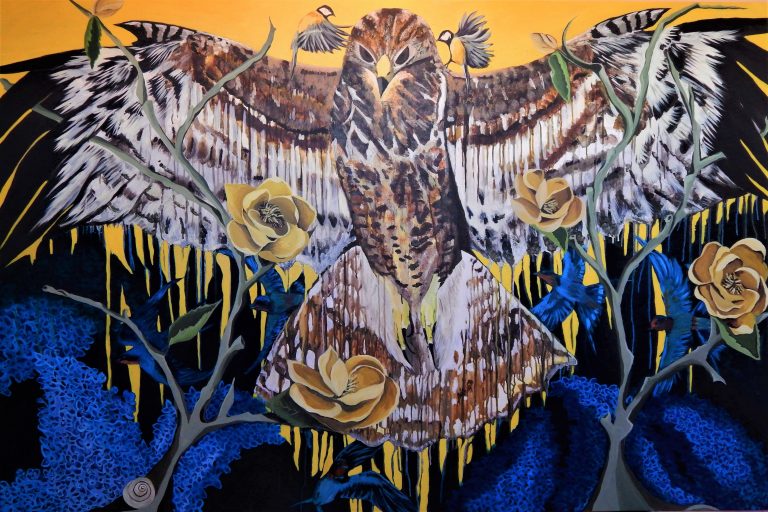